Design a site like this with WordPress.com
Get started
Skip to content
One Man And His Garden Trowel Uncategorised 6th July 201814th July 2018 3 Minutes

Finally, we had some rain here in Somerset. The garden is still looking a little sorry for itself, and the front lawn is decidedly crispy underfoot. However, the wet stuff was welcomed with outstretched arms by this gardener who took the opportunity to plant out some young snapdragon and scabious plants, oblivious to his increasingly drenched state until his wife poked her head round the back door and enquired whether he was aware that it was raining. He looked up, gazed at her lovingly and replied…

Anyway, here are my Six on Saturday… 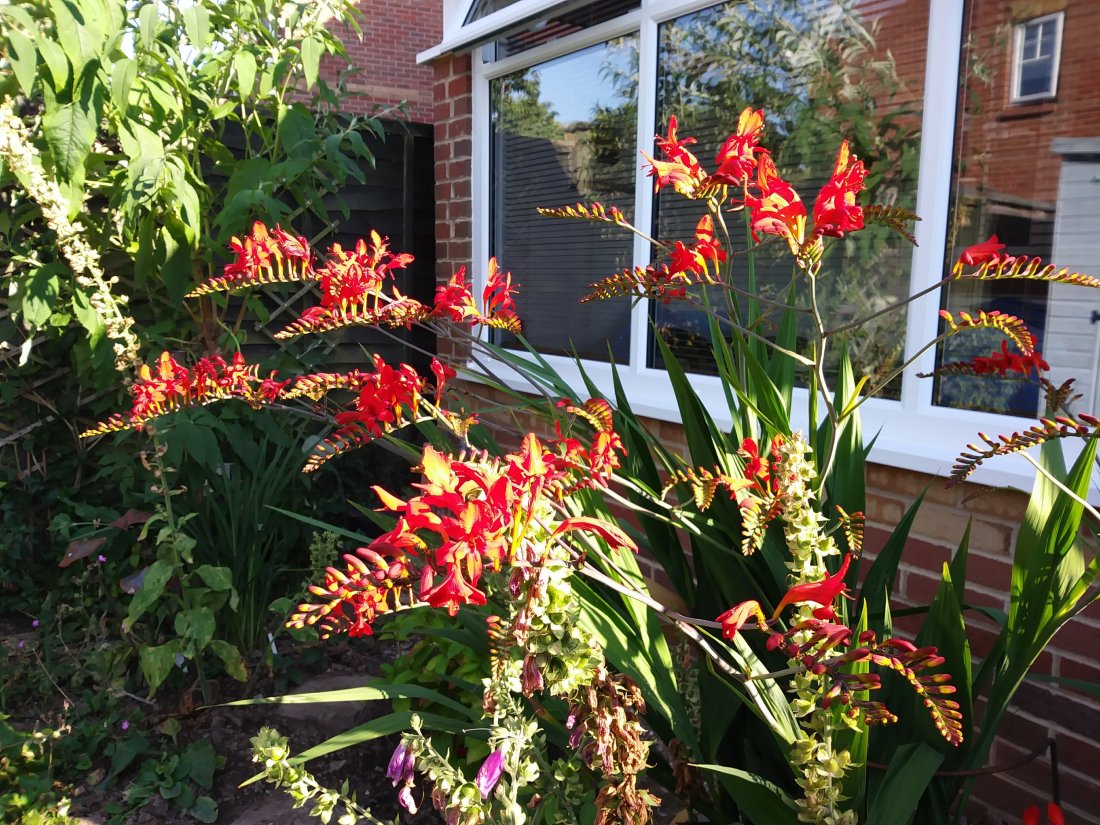 1. The Crocosmia ‘Lucifer’ has now exploded into flower and is looking rather vibrant, though not quite as vibrant as this picture would seem to suggest. My phone struggled to accurately capture the flaming red, adding a rather yellowy luminescence to the petals. As usual they’re begining to fall over, despite support, but they do look rather impressive when you’re looking out from the conservatory.

2. This shrub form of honeysuckle is doing particularly well this year (it appeared to enjoy being dug up and placed in a pot when the builders came). It never gets much taller than a foot or two as it’s pruned back each spring. Unfortunately this means you have to bend down quite a bit to appreciate the scent, which I’m finding increasingly trickier to do as the years go by (I think I may need to take up yoga) but it’s worth it.

3. The Californian Poppy tends to do it’s own thing each year, seeding itself wherever it fancies. I prefer this yellow version so naturally the orange one is proving far more successful in its going forths and multiplings and my frequent attempts at sowing the red Californian Poppy have been a dismal failure every time. It’s rather perplexing. They can get a little big and unweildly after a while but they don’t seem to mind being chopped back hard. The flowers last several days in a bud vase, closing up in the evenings and opening up again in the morning which is strangely saitisfying.

4. When we moved here 6 years ago I think the Jasmine had only been in the garden a short time, presumably planted to weave itself through the top row of trellis that runs along the fence and provide a bit of privacy. It’s hard to determine whether it began on our side of the fence or the neighbours’ side, but it’s really taken off over the past year or so. If the back door is left open in the evening and there’s a gentle breeze, its wonderful scent can fill our living room at the front of the house. 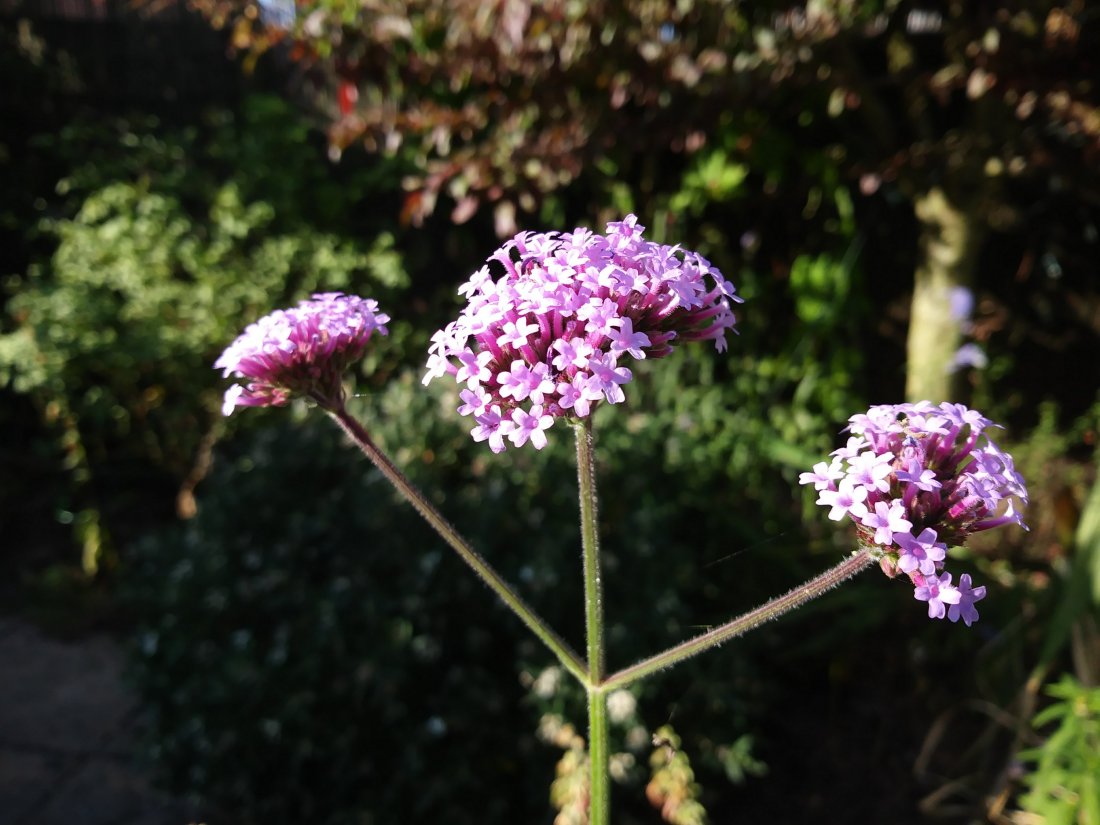 5. Verbena bonariensis is one of my favourite plants. It seeds itself around the garden, it doesn’t take up much room, the bees and butterflies love it (we’ve even had the odd hummingbird hawkmoth drinking from its nectar rich flowers) and once it starts flowering it goes on flowering throughout the summer and well into the Autumn. 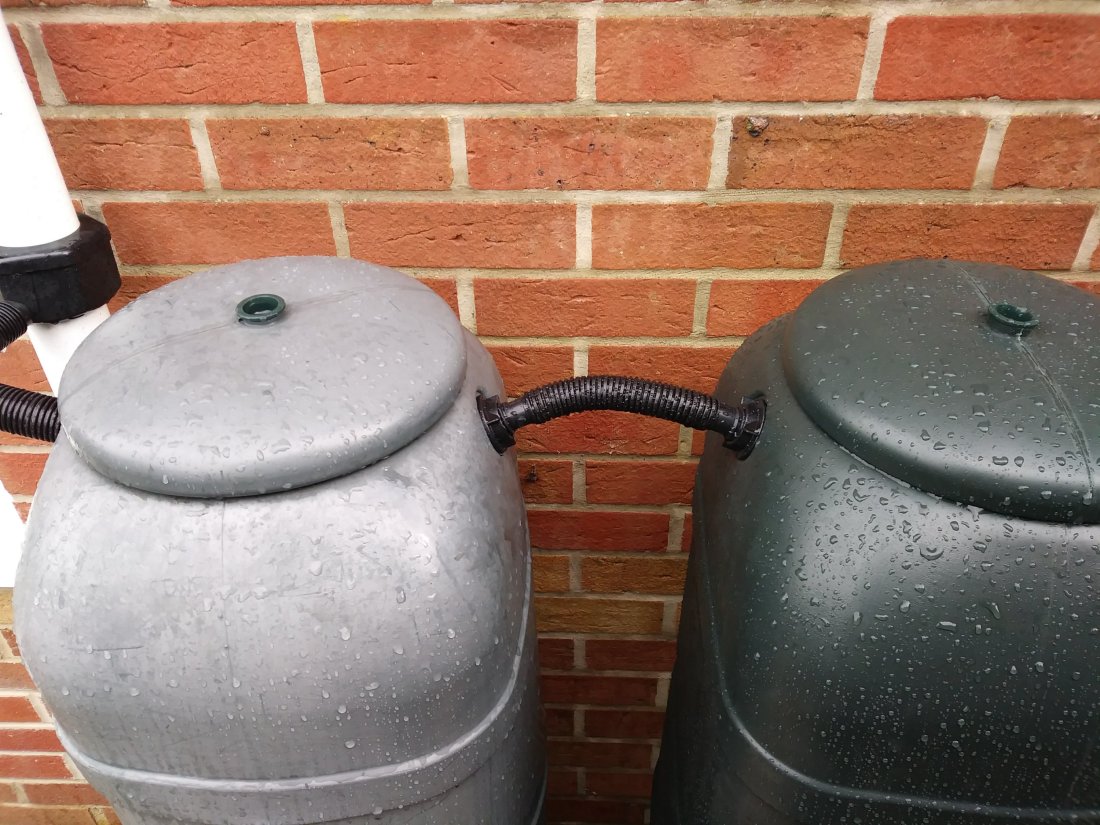 6. And finally, water butts. Two of them. It seemed a shame to be limited to just the one slim line water butt when there was the potential to fit another to double the amount of free water for the garden. Admittedly two slim line water butts probably take up the space of one normal size one and it’s a bit trickier for my wife to squeeze past with her bike, but they’ve already proved a great success. The rain we had last Sunday filled the first one and half filled the other. The sound of the rain water trickling into them was strangley exciting and when the new one started to fill up filming was required to capture the momentous occasion. Prepare to be awed (if you’re viewing this on a web browser)…

By Wednesday the new one had already been emptied (despite the rain the ground is still bone dry) but as luck would have it we had more of the sweet smelling wet stuff leaving us with two completely full water butts and a very happy gardener.