It’s been a funny old week. It was wet and extremely windy last weekend (which put paid to any outdoor pottering for this fair weather gardener), damp and dismal during the first half of the week, cold and frosty midweek and then the snow arrived Thursday evening and we were greeted with this Friday morning. 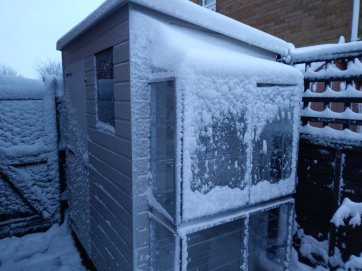 It’s been hard to keep up and it hasn’t been without its challenges. Which leads me to my first Six on Saturday.

1. I made an accidental online purchase of a climbing rose the other week. After the gales last weekend I’ve managed to justify the purchase by viewing the rose as a vital fence support. It’s David Austin’s Gertrude Jekyll, a scented rose which can apparently be grown as either a climber or a shrub. Miss Jekyll was bought as a bare root plant and I found her sitting by the side gate upon my return home from work on Wednesday evening. I’d read you shouldn’t plant bare rooted plants in frozen ground and naturally, after months of relatively mild conditions, the weather contrived to turn all icy the moment Gerty arrived. I left her all wrapped up in the shed the first night and did a bit of googling (other search engines are available) to determine the best course of action. On Thursday evening, in a race against the elements, I shoved her in a bucket of water for half an hour or so, had my tea (bean and potato moussaka in case you were interested), and then, as the first few snowflakes began to fall and under the cover of darkness, removed her from the bucket, plonked her in a pot with some compost and hid her under the swing seat cover. As soon as it warms up a bit I’ll plant her properly.

2. I’ve had a love-hate relationship with lupins over the past few years, but as summer came to an end last year we had well and truly fallen out. I’d raised and nurtured several lupins from seed almost two years ago. It had been a constant battle to protect them from slugs, snails and aphids and after they failed to flower last year I decided I no longer cared what fate had in store for them. They were on their own. Me and lupins were through. Forever. 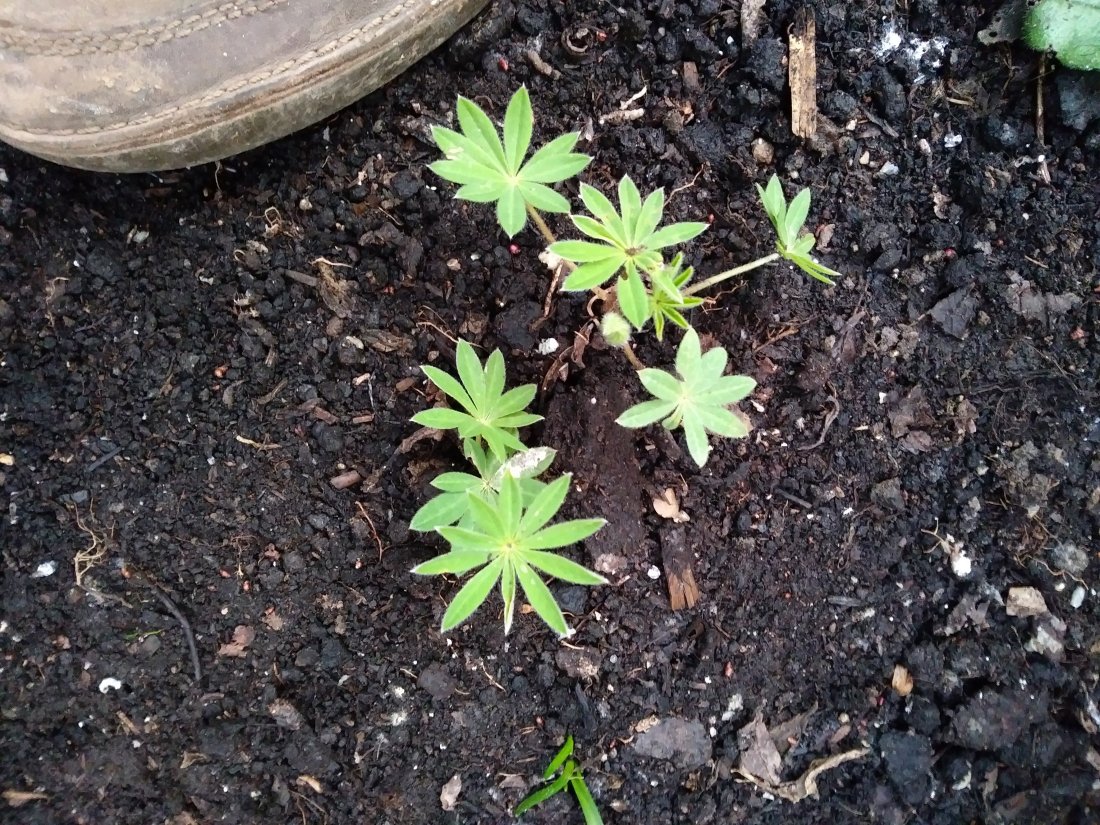 When I took a quick look around the garden late on Saturday I was rather surprised to discover that a few of them were still alive and looking surprisingly healthy and unnibbled. It’s all a bit puzzling really as the slimy plant assassins of the night are obviously out and about if the leaves of the primroses are anything to go by. Still, I’m not going to get my hopes up.

3. The Golden Graham Honeysuckle was showing signs of life last Sunday. It may have had second thoughts after the snow. I need to read up on when to prune it as I can never remember. Early Spring perhaps?

4. Although a bit annoying rose-planting-wise, the icy weather we had mid-week beautified some of the plants in the garden, particularly the old flower heads of the Sedum. 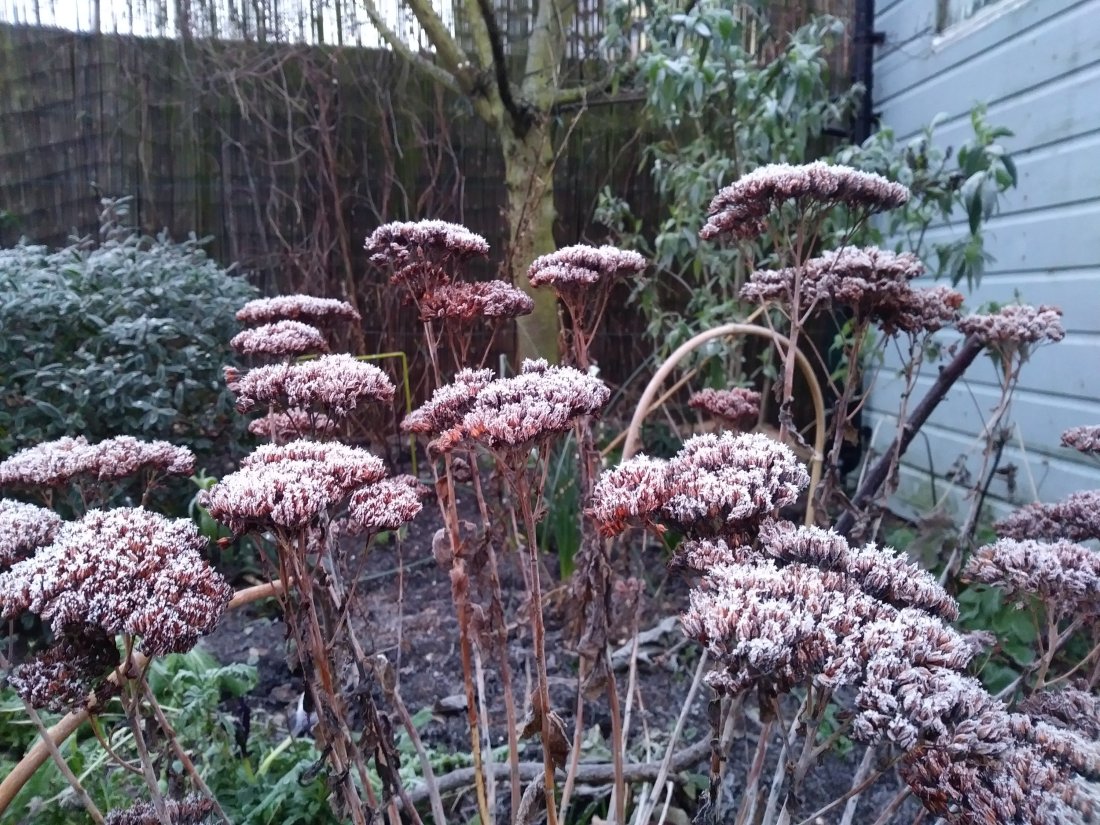 5. The Prunus cerasifera ‘Hessei’ tree has just started to flower. There are only a few flowers out at the moment but I think it’s going to put on a good show as the weeks go by. 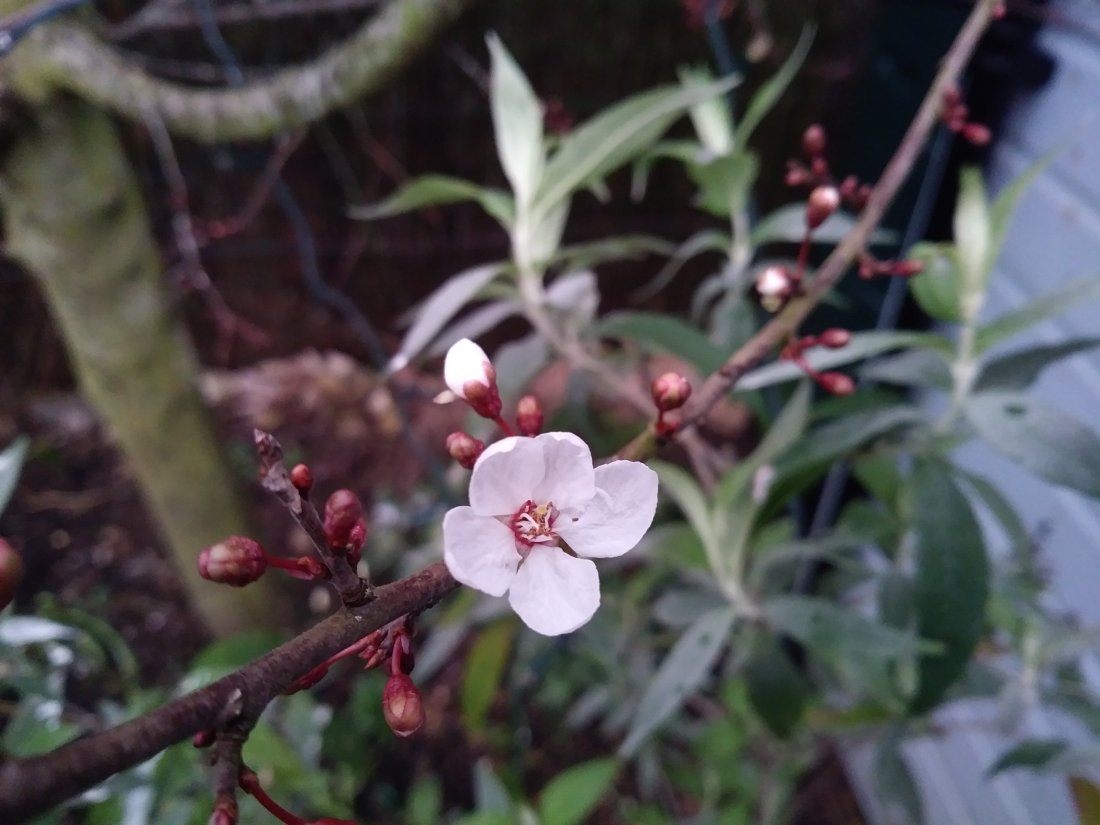 6. And finally… Another accidental purchase that arrived on Friday despite all the snow. I’ve been pondering getting this plant for a while now and I’m hoping it will go in the newly extended patio bed. What was that? What is it? Ah, all will be revealed next week…