In the wee small hours of Thursday morning I awoke to the sound of a howling gale outside. I lay there for a while worrying about the same thing I always worry about during stormy weather – the aging fences. Having trained a variety of plants up them, I don’t relish the potential hassle if they’re flattened and need replacing. But I decided there was no point worrying, there was nothing I could do. Just relax. Forget about the fences. Ignore the ominous sounds outside. Just try to get back to the land of Nod.

But then I suddenly remembered the swing seat cover. Earlier in the week I’d noticed that one of the corners of the cover had become detached from the scary/cute (delete as appropriate) hedgehog ornament. I’d forgotten to reattach it. Damn. It was 1.30am. Could I really be bothered to do it now? After all it would probably be fine. Nope, I needed to find my inner Zen, forget about the gales and the swing seat cover just as I’d managed to forget about the fences… hmm, were they still standing? No, stop that. Empty my mind of all thoughts, including the thought of emptying my mind of all thoughts. Embrace slumber. 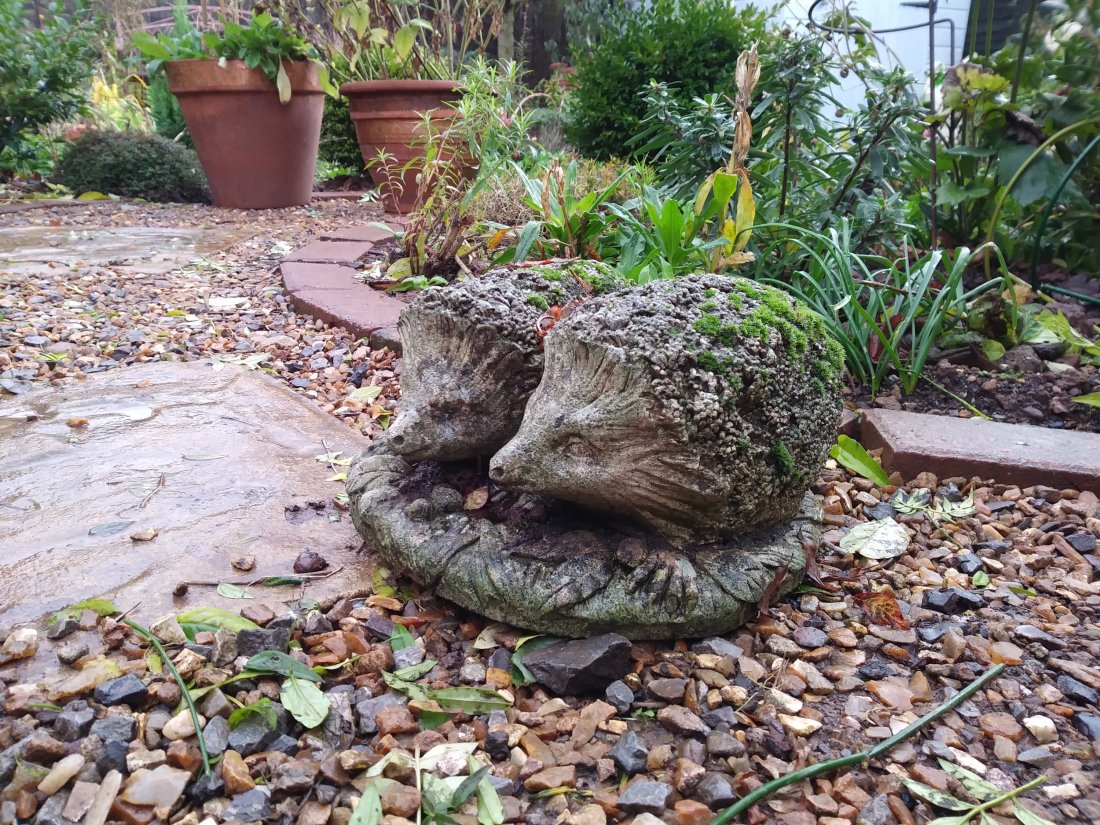 Five minutes later, holding a pocket torch in my mouth whilst attempting to reattach the corner of the swing seat cover to the hedgehogs (which look even more sinister at night) I felt strangely calm. Out in the garden the wind didn’t sound quite so bad as it had when I was lying in bed. But adding to this sense of calm was the rather lovely scent of my first Six on Saturday…

1. Oh yes, it’s the Sweet Box… again! Small flowers yet a mighty scent. I much prefer this small compact variety than the bigger and rather straggly version we have near the back door. It’s in full flower now. The berries are also rather attractive. 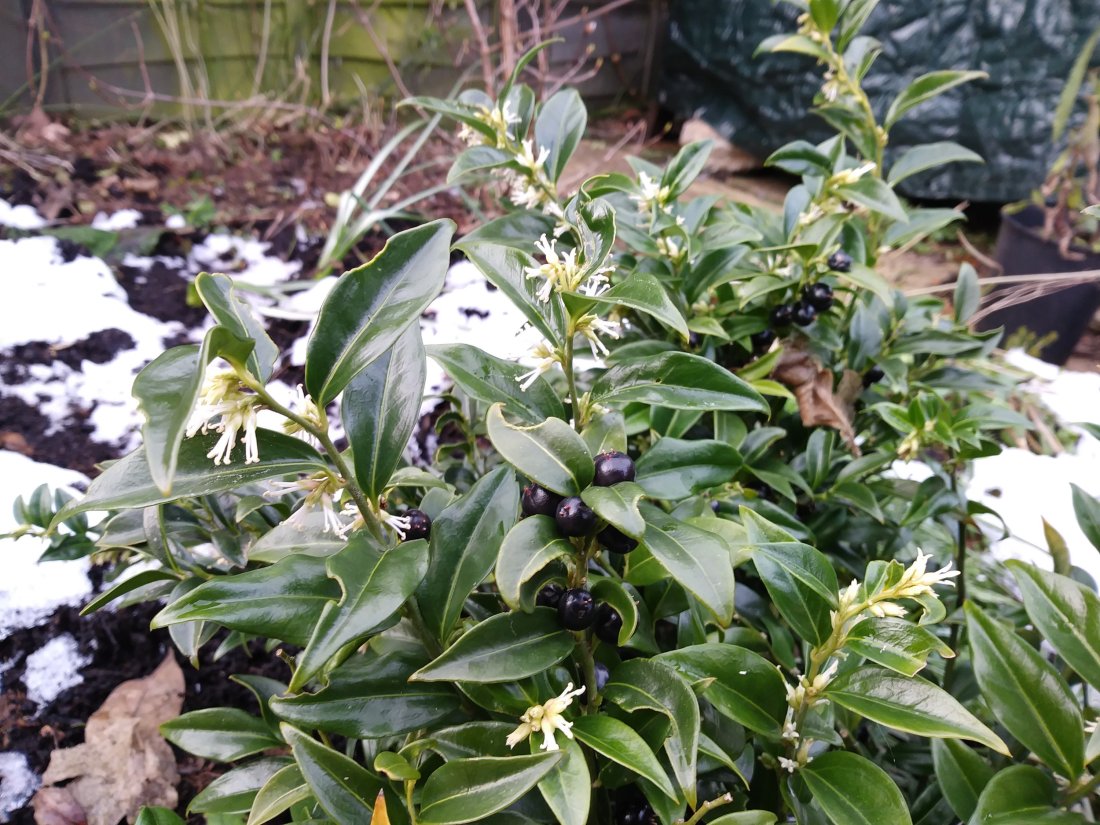 2. The bulbs under the Prunus cerasifera ‘Hessei’ tree were doing rather well when I took this photo earlier in the week (they’ve received a bit of a battering since those gales and Storm Erik). Crocuses and a solitary snow drop. I spotted some pots of flowering snowdrops on sale in town last weekend and I think I’m going to purchase a few to provide this one with a bit of company. 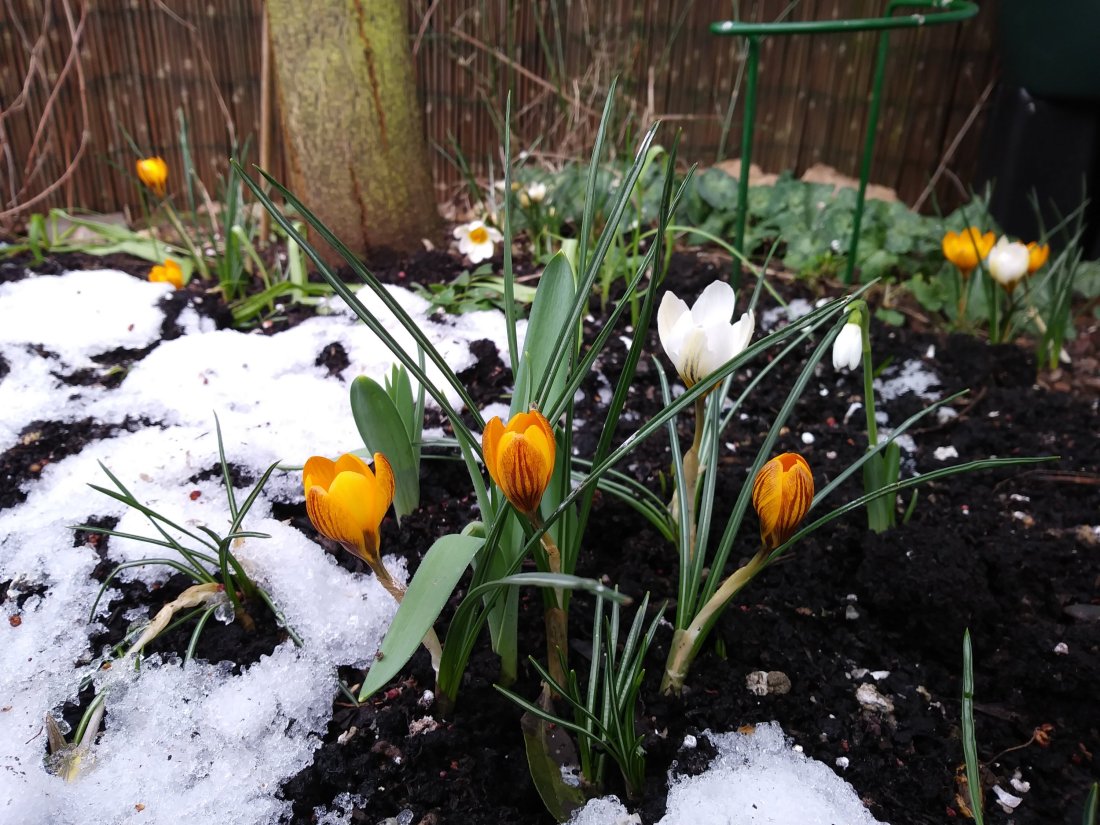 3. Talking of purchases, last weekend’s visit to Wilko (one of my favourite shops as it seems to stock pretty much anything) resulted in a few plant related buys including a pack of freesia. I’ve always fancied growing these as my wife and I are keen on their scent. Come March I’ll need to find a spot for them. 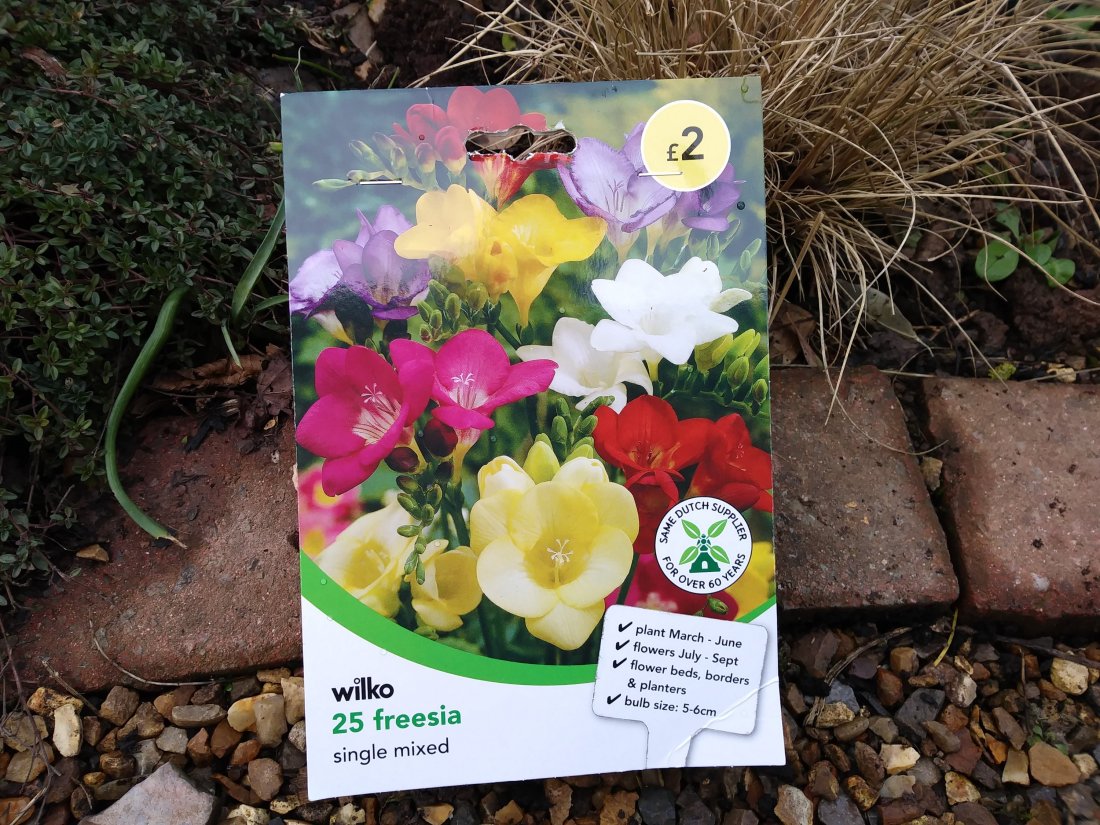 4. I used toilet roll tubes for my sweet peas last year and they did a grand job. I’m collecting more for this year’s sweet peas but I’ll still be reusing my vast array of plastic pots for seedlings (and will continue to do so until they’re no longer fit for purpose). However, I spotted these fibre pots for a pound. Apart from the plastic wrapping, it’s rather encouraging to see the shops providing an increasing number of alternatives to the plastic variety. 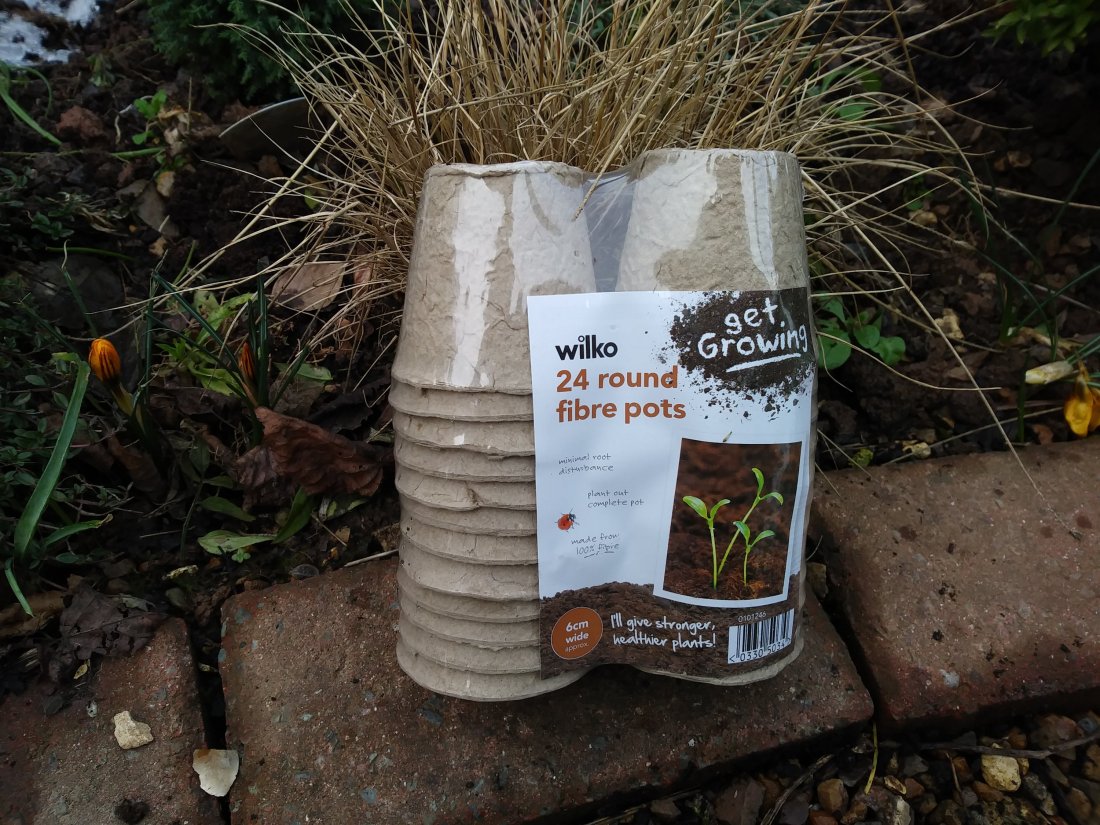 Well, I unpacked it and here it is – a nondescript twiggy thing/standard ‘Marina Blue’ Hibiscus. 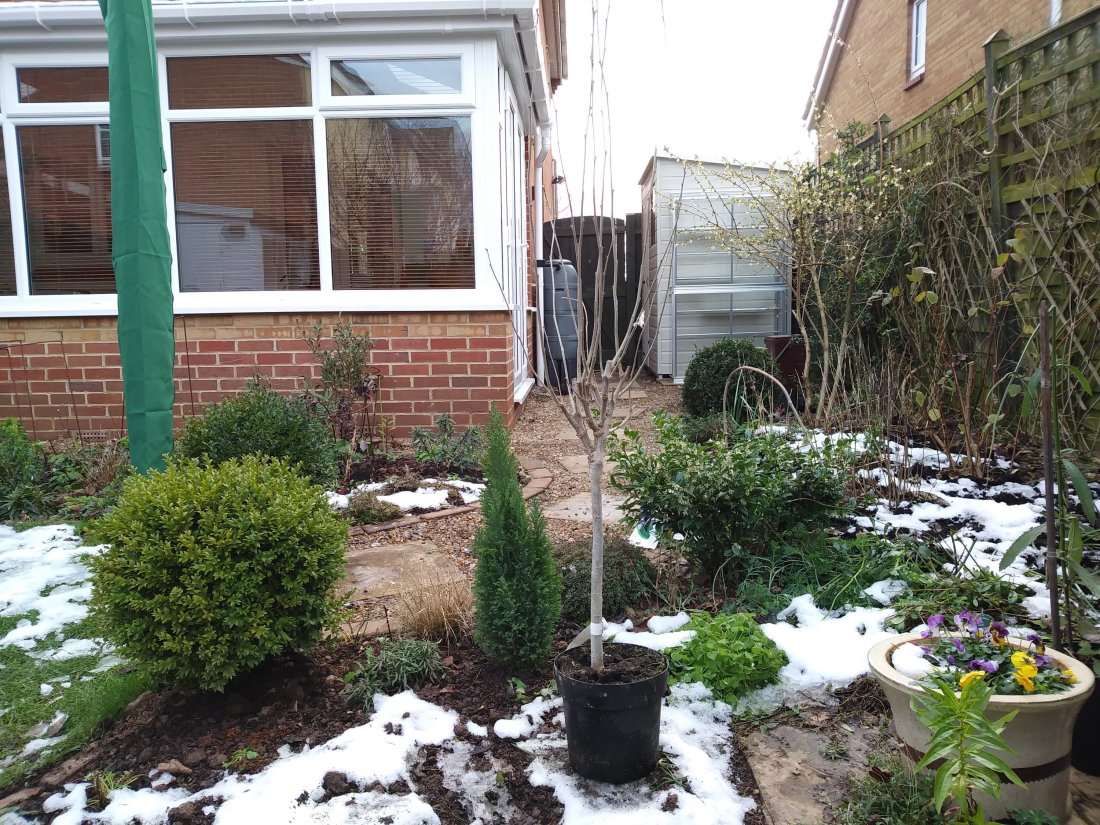 I’d always admired the flowers of a large Hibiscus that grew in a front garden I used to pass on my way to and from work. It was a show during late summer and the flowers remind me a bit of crepe paper. I’ve been pondering getting a Hibiscus for a while now but wasn’t sure where I’d put it. The recently extended patio bed (which may be extended a tad more) has hopefully provided the ideal spot. The grand plan is that it’ll add a bit of height and obscure the view of the patio/path a bit (depending on where you are) so that you can’t see all of the garden in one go (admittedly a bit tricky in a small garden). Apparently you can prune it back each year if required so I’m hoping it won’t get in the way of any sheets hanging on the washing line. 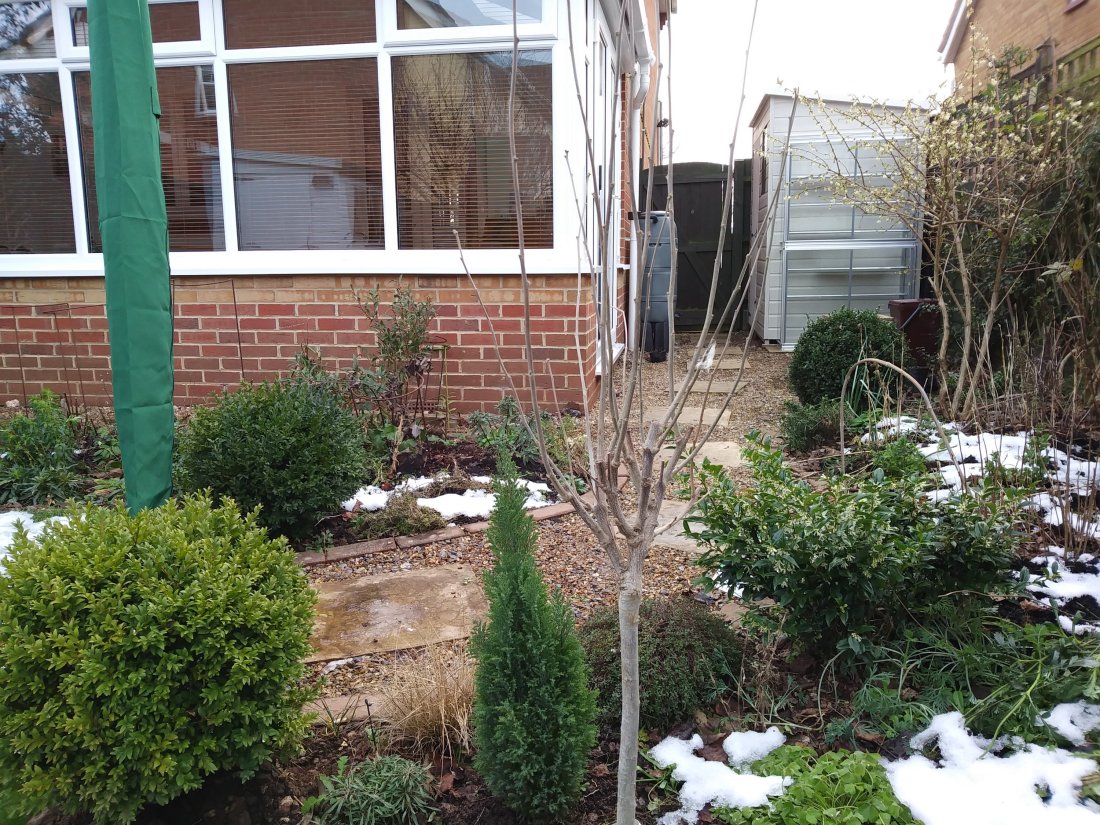 6. And finally… a birthday present. A bird feeder in a box. It’s an ingenious idea and it was easy to put together (I didn’t require any adult supervision).

We get a good variety of birds feeding in the back garden but I’m going to attach this one to the outside of the living room window where hopefully we’ll get to enjoy the odd feathered visitor up close. 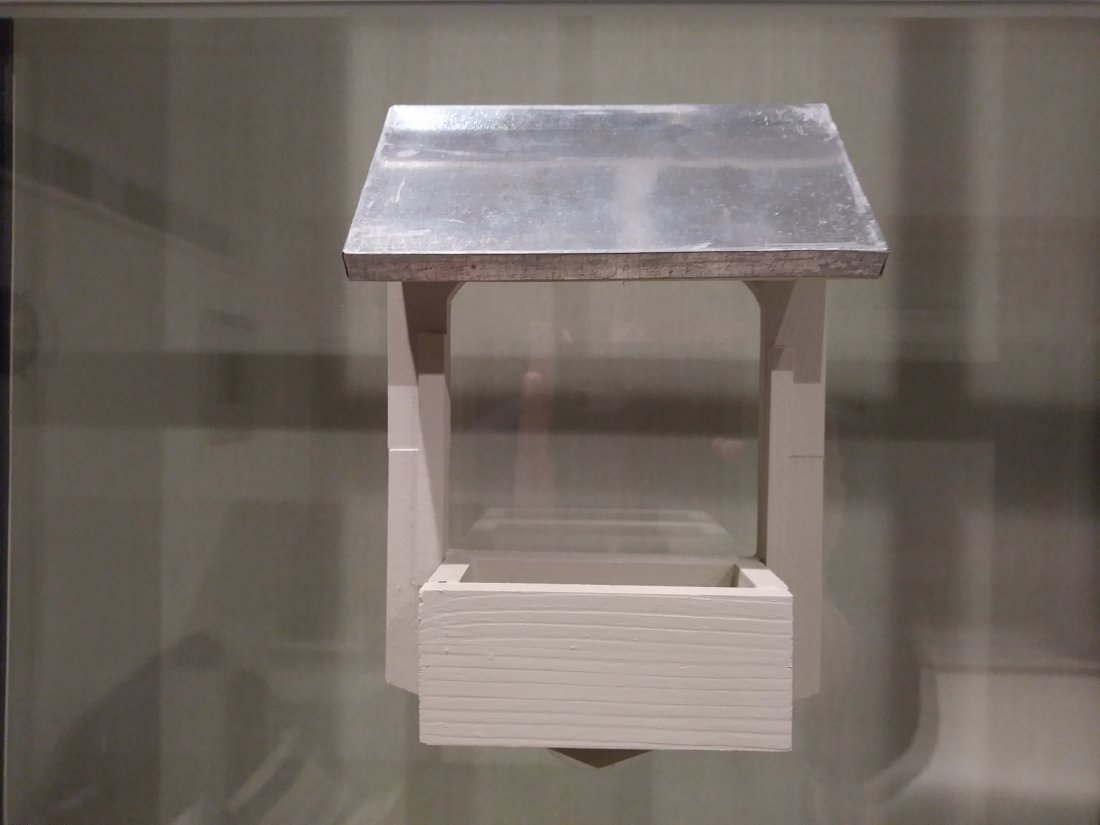