Design a site like this with WordPress.com
Get started
Skip to content
One Man And His Garden Trowel Uncategorised 25th May 201922nd July 2020 3 Minutes

I think it was T. Bangles that said ‘Time it goes so fast when you’re having fun’. It came as a surprise to discover it’s been a year since I joined in with Six on Saturday, a meme started by The Propagator that has introduced me to a friendly lot of gardeners from all over the world and led to the discovery and purchase of plants that I never knew I needed. 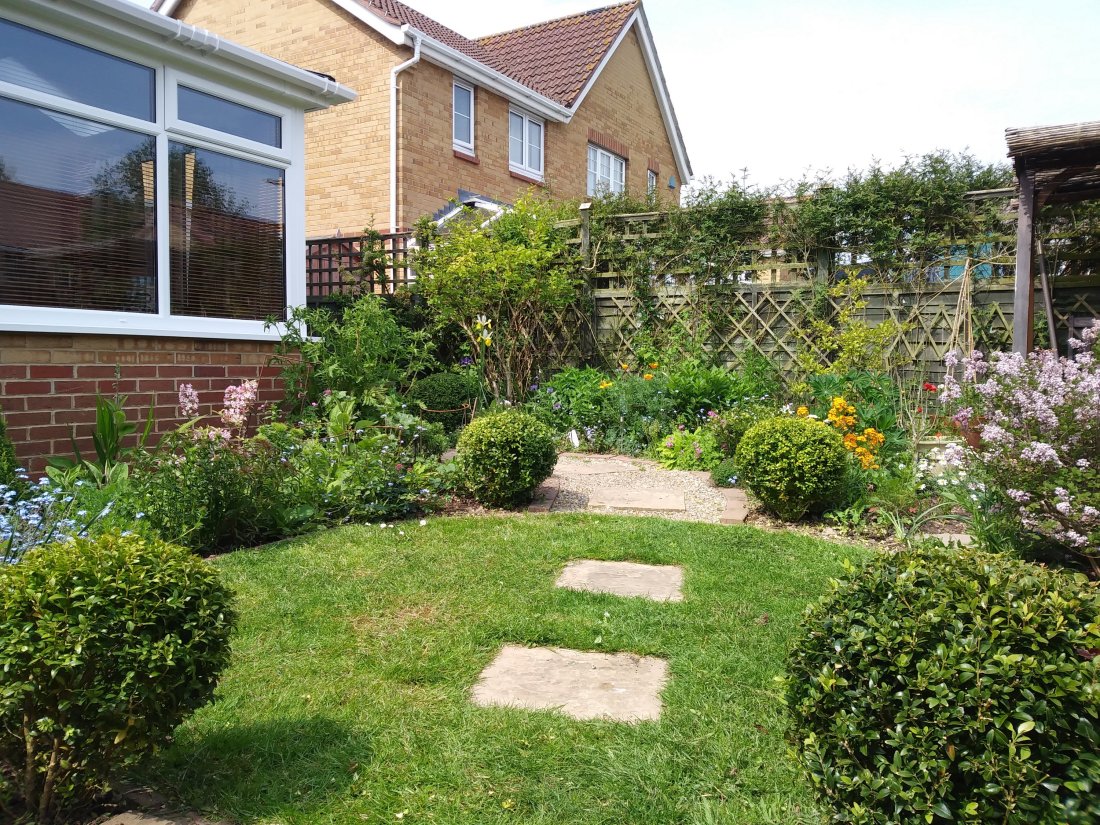 When I started I wasn’t sure I’d be able to find six things in our small garden to write about each week, particularly during the winter months. Yet Six on Saturday has made me take more notice of what’s happening on our little patch of green and it’s made me appreciate that there’s always something going on, even in the depths of winter. At this time of the year though it can be a tad tricky choosing just six things in the garden to share. But I’ve made those big tough decisions and so onto my first SoS…

1. Foxgloves. I used to be very wary of Foxgloves as a kid, thinking that if I so much as touched one I’d most likely snuff it. This time last year the pink foxgloves were flowering merrily away out in the back garden but they’re only just coming into bud at the moment. However, a few white ones are flowering in the sunnier front garden. They self seed each year and you never know what colour combo you’re going to get. I’ve not had this white one with purple spots before.

2. Over the past week and a half I’ve started hardening off plants. The tomatoes and the morning glory have been the top priority as they’re getting too big for the mini greenhouse and I’m hoping to plant these out over the long weekend. 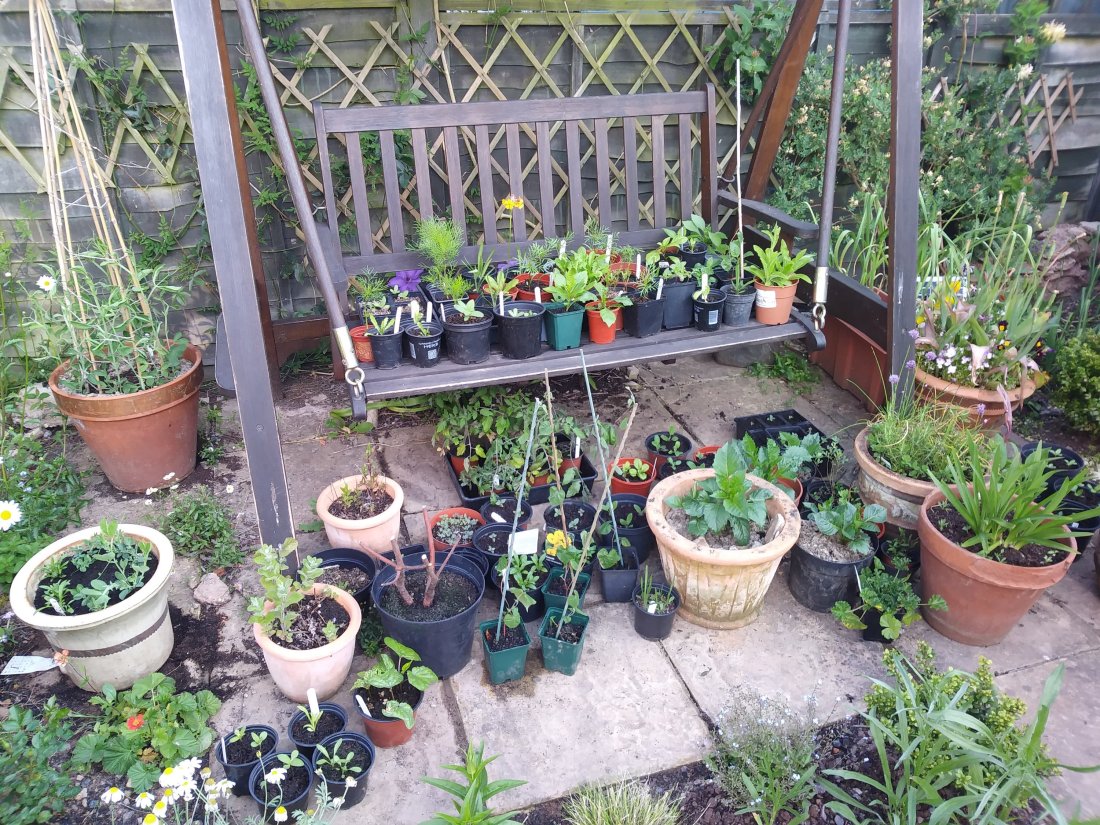 I have a tendency to start hardening plants off when they’re rather small (I get bored of potting on and the constant watering). I was planning on putting some of the zinnias and dahlias into the ground rather than big pots this year but they’re so tiny at the moment I fear the slimy plant assassins of the night would make short work of them. They’re going to have to spend a few more weeks on the swing seat, which is a pity because I’d quite like to sit on it.

3. A new purchase made last Saturday, Primula vialii ‘Red Hot Poker’. I used to have one that grew next to the small pond. It came back year after year until I decided to split it. One half was planted in a bed near the bird bath and the other half was re-planted near the pond. The plant placed near the bird bath was doing well until it was dug up, along with a white Ragged Robin, by a badger. The other half died back over the winter and was never seen again. This new one is going near the pond.

4. The deliciously scented Margaret Merril featured in my first SoS and has just started flowering. She was moved to the new patio bed early in the year and seems to be doing okay so far.

5. I know, I know, I can’t quite believe it either. Lupin buds! I grew several lupins from seed two years ago. For the first two years they were cosseted and vigilantly protected from slugs, snails and aphids. But when they failed to flower last year I washed my hands of them. The ungrateful so-and-sos were going to have to fend for themselves. Three or four have survived and this one (which I’ll admit to having assisted lately by squashing the odd aphid or three) has several buds and is almost as tall as the hibiscus. What was that? Err, no, the hibiscus still looks decidedly deceased, though I scratched the surface of a few stems the other day and found green so perhaps all is not lost. 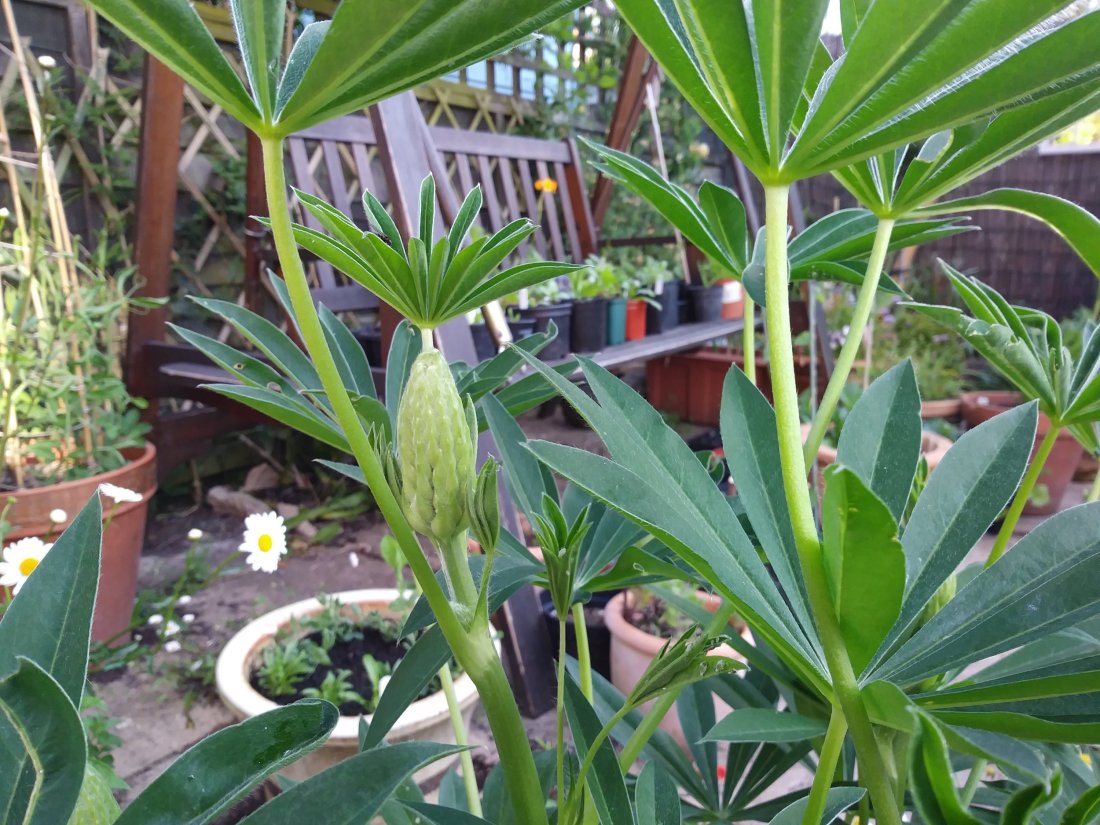 6. And finally… Yes, more Dutch Irises. Purely yellow ones this time. Some of the others are beginning to go over but these, near the pond, don’t get quite so much sun as the rest and flower that little bit later. I’m going to miss them when they’ve finished. 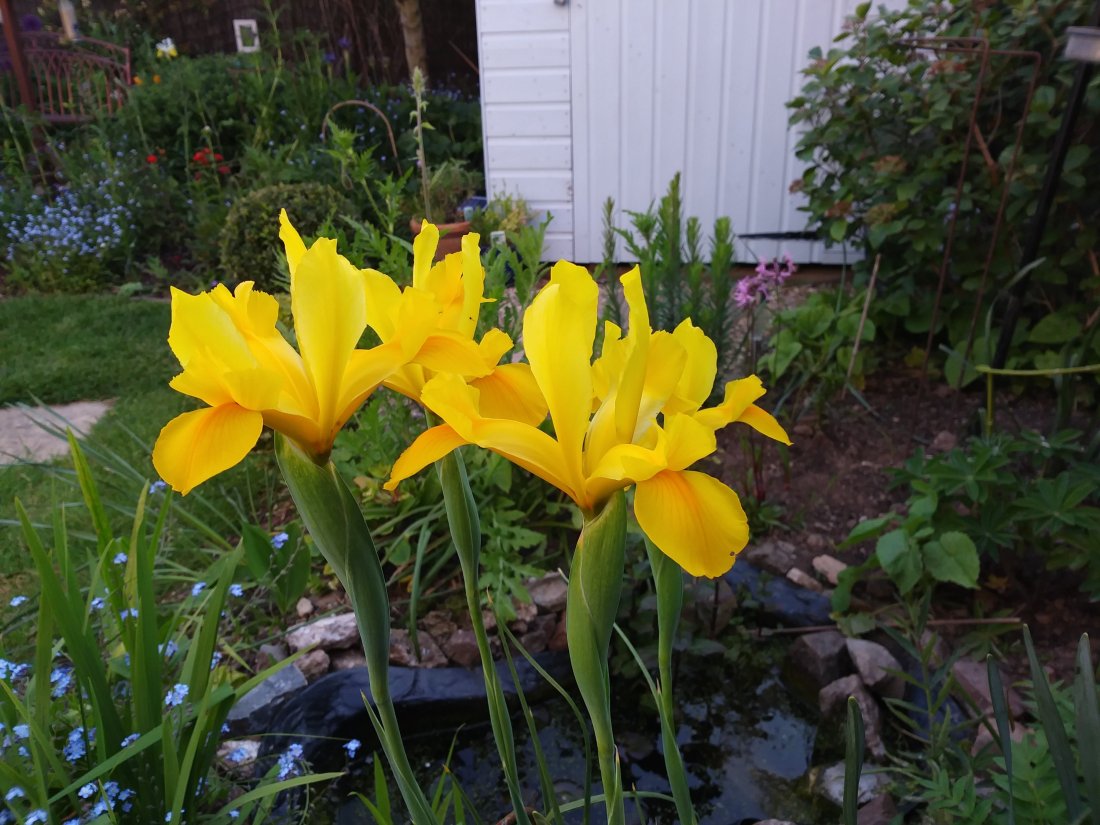