Design a site like this with WordPress.com
Get started
Skip to content
One Man And His Garden Trowel Uncategorised 6th July 201910th October 2020 2 Minutes

I sat on the lawn the other evening, eyes closed, simply enjoying the warmth of the sun, inhaling the delicious scent of the mock orange that hung in the air and listening to the buzz of the bees and hoverflies on the nearby flowers. It was a moment of peace. Tranquillity. All cares forgotten just for a few minutes. I had found my inner zen… until the unmelodious racket of a scrawny young magpie shattered the peace and I began a hay fever induced sneezing fit having inhaled the pollen filled evening air a little too deeply. 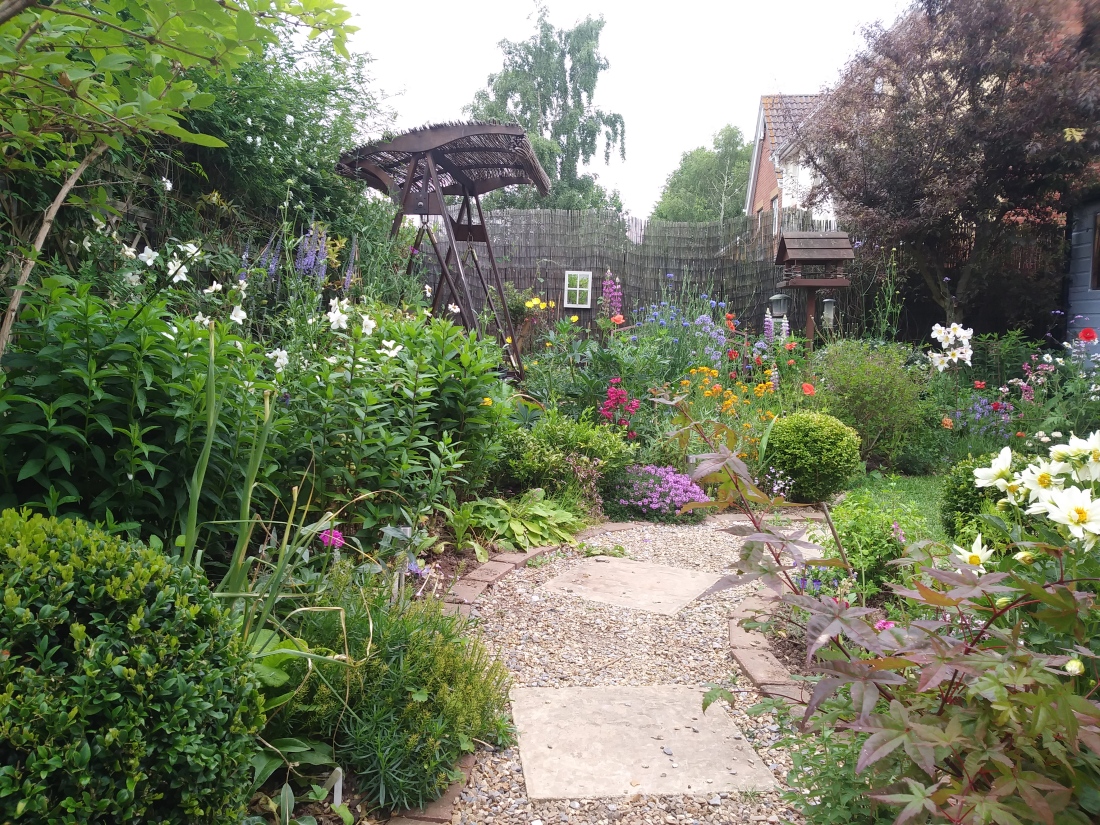 I then began pondering what six gardeny things I could share for today’s Six on Saturday, and it was tough. Really tough. But after much deliberation the final six have been chosen…

1. Actually, there wasn’t much deliberating over the inclusion of this one. ‘Miss Belgium’ is flowering. She’s a compact variety that was purchased in the autumn of 2017. This is the first time she’s flowered and I’m rather taken with her.

I’m not sure whether her leaves are supposed to be tinged with red but it adds to her beauty. The flowers are gradually changing from a pale green to a fetching pink. It’ll be interesting to see how the colours continue to alter over the coming weeks and months.

2. The tomatoes are flowering away. Yellow Tumbling Toms and Minibel. And look… tomatoes! 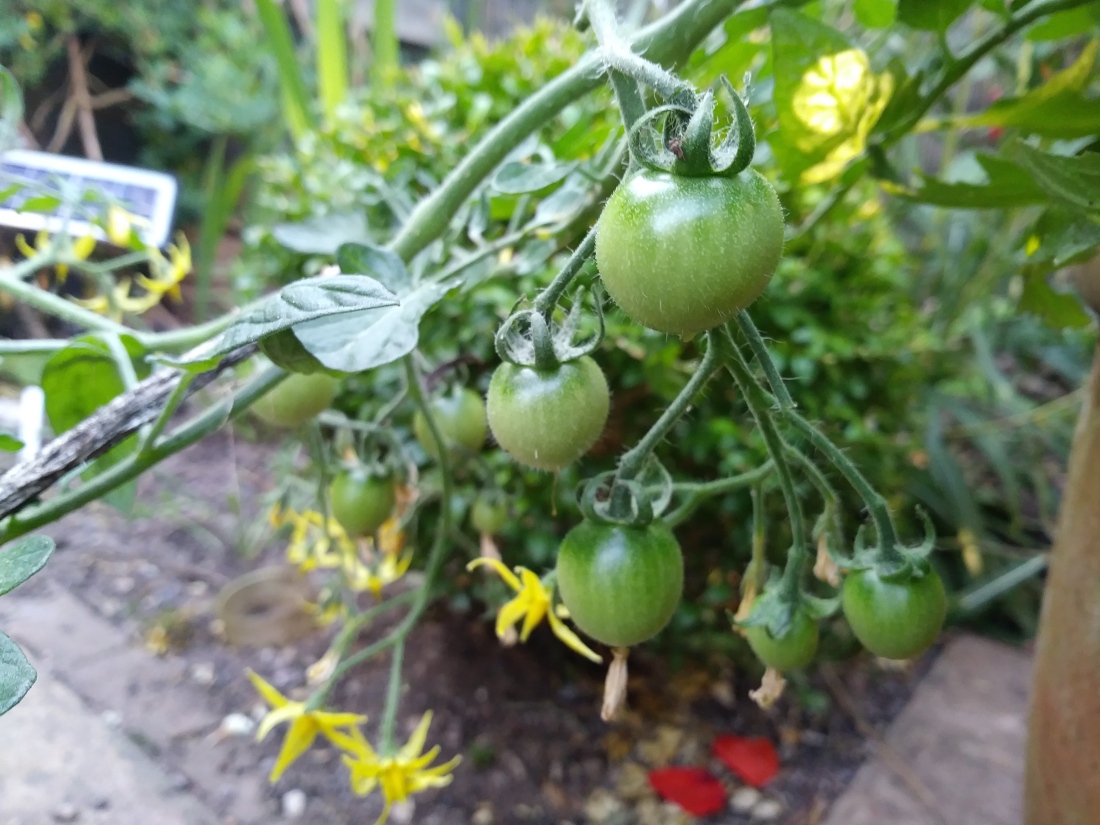 3. This Veronica has struggled for many a year under the big tree at the back of the garden. It would become straggly, floppy and was never much to look at. The bees liked it though.

I dug it up in the spring and moved it to the back of the bed by the curving path and it’s looking far happier.

4. I think Linaria ‘Fairy Lights’ might be one of my favourite hardy annuals at the moment. I grew it for the first time last year after my great aunt gave me a packet of seeds from a garden magazine. I sowed a few of the leftover seeds this spring but there are quite a few offspring from last year’s batch (though there’s no sign of any white and yellow varieties yet). They’re rather striking but also blend in rather nicely with their neighbours. 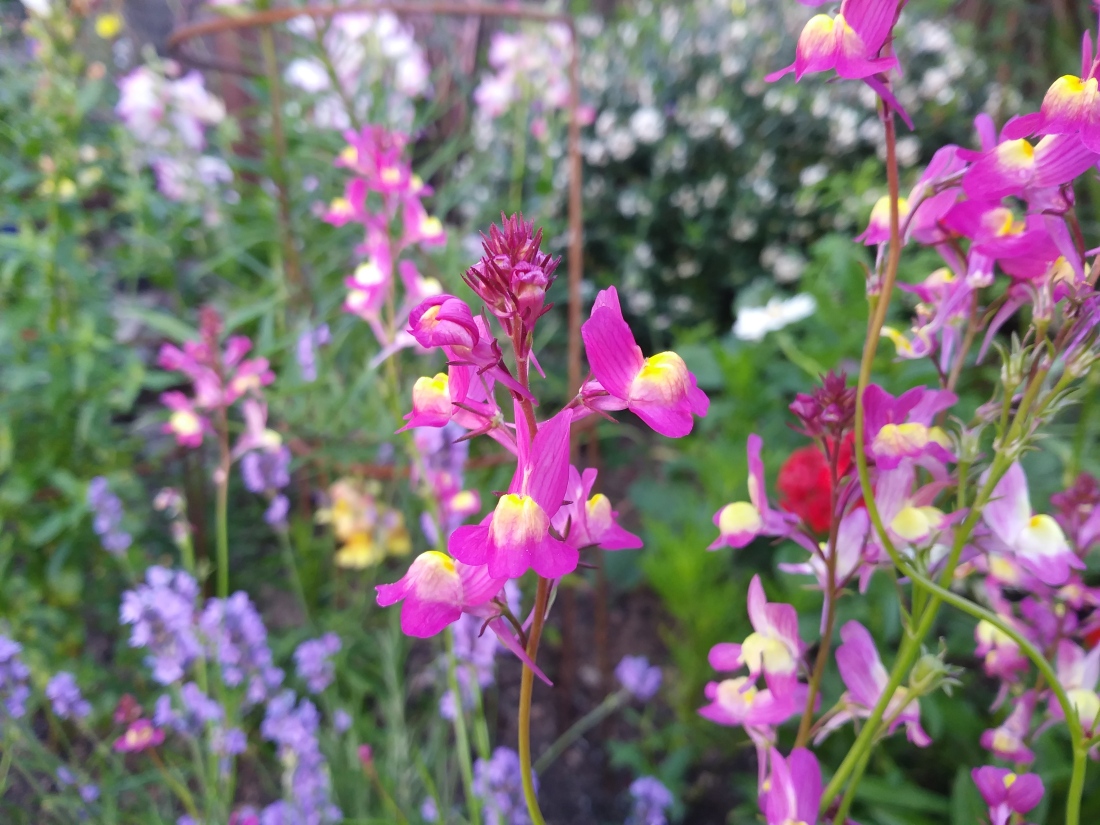 5. Now initially I was going to include a dahlia in my final six. But then I thought “nah”, the dahlias that have survived the slimy plant assassins of the night thus far will be flowering for months to come, there’s plenty of time to include them (I really hope I don’t come to regret this decision). So the Bishops of Llandaff and Aukland and the first of the flowering dwarf dahilas grown from seed (a yellow one) have been put on hold for now, although you can catch a glimpse of the old Bish of Llandaff in one of the Veronica photos and the little yellow one in my next choice: the carpet of Alyssum and Virginia Stock. It’s one of those happy accidents. The Alyssum was planned, the Virginia Stock was not, but I think the two work quite well together.

The Alyssum also looks good with this Viola. 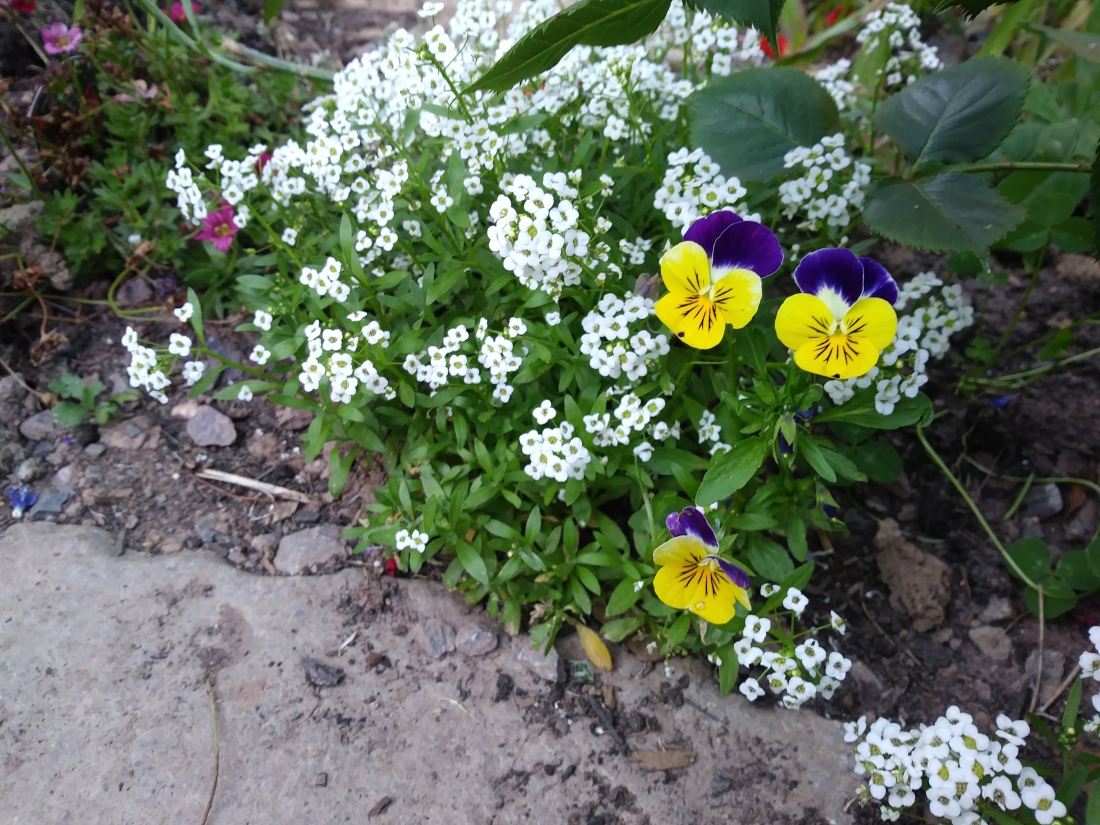 6. And finally… A few Penstemons have been flowering away for a while now. My favourite is Sour Grapes which lights up this part of the garden. It’s another favourite with the bees.